Computer use is a fact of life in today’s world. But for someone who grew up in an analog world, the switch to digital can be disorienting. You can help make your senior loved ones’ time on the computer a much more enjoyable – and less frustrating – experience.

When helping your loved one with their computer, remember to be patient. This is often a new and daunting activity for seniors, and many technically proficient people tend to be a bit too brusque when trying to teach others about tech. Teach, don’t lecture.

A recent report showed that up to 1 million Americans are non-verbal. For someone who cannot easily communicate, the world can be a terrifying place. But there are some ways you can help a non-verbal loved one live a richer and fuller life.

Emotion Board. A simple device showing a person expressing different emotions. The non-verbal person can just point to the emotion they’re feeling to help express themselves. Caregivers can even use the board to communicate their emotional state, too. This simple tool can greatly aid in expressiveness.

SMPL Music Player. This simple device lets you give your loved one the gift of music. Simply load their favorite mp3 files onto the player, and they can control their music just by lifting or lowering the lid. No need to ask a caregiver for music.

Legos. The classic kids’ toy is actually one of the greatest entertainment tools for non-verbal people. The simplicity and elegance of the building blocks means they can play their own way, and create as they want, without relying on others.

Some scary news from the Michael J Fox foundation.

“Of respondents with Parkinson’s, 51 reported a diagnosis of COVID-19. In patients with both diagnoses, 55% reported a worsening of their motor symptoms such as tremor, slowness or imbalance during infection. Slightly more than 50% also reported worsening non-motor symptoms, such as mood issues, digestive problems, pain, and fatigue.”

Ultimately, this is another bit of evidence that we have to take the Covid pandemic seriously. As much as it may pain is to stay away from older or infirm loved ones, we need to keep up safety measures until a vaccine is available.

Keeping Loved Ones Safe During Lockdowns

Recent upward trends in Covid numbers means more and more states are reversing decisions to loosen lockdown restrictions. That means it’s time to start asking some questions of elder loved ones who have to stay at home.

Helping Seniors Find The TV Shows of their Youth

In the year 2020, we have so many choices for entertainment that we are paralyzed by the options available. But our senior loved ones grew up in a simple era, one where there may have only been three television stations to watch (if that many). That lack of options means people from that era tend to have very similar cultural touchstones. Everyone watched MASH, Ed Sullivan, and Gunsmoke, and that common thread can be something to help senior bond. The only problem is finding those shows nowadays. Some shows – Jack Benny or classic Doctor Who, for example – are unwatchable simply because no copies exist of many episodes. But, many of the most popular shows of the era are available through one of the primary streaming services.

The following is a selection of  classic TV shows, and the streaming services they can be found on:

These streaming services can be accessed through any computer, or set top streaming devices like Apple TV, Roku or Amazon Fire. Pairing these devices with the smpl Universal Remote will make them even more accessible to your senior loved one.

From NPR, a basic physics lesson may be a key to understanding diseases like Alzheimer’s.

“The same process that causes dew drops to form on a blade of grass appears to play an important role in Alzheimer’s and other brain diseases.

The process, known as phase transition, is what allows water vapor to condense into liquid water, or even freeze into solid ice. That same sort of process allows brain cells to constantly reorganize their inner machinery.

But in degenerative diseases that include amyotrophic lateral sclerosis, frontotemporal dementia, and Alzheimer’s, the phase transitions inside neurons seem to go awry, says Dr. J. Paul Taylor, a neurogeneticist at St. Jude Children’s Research Hospital in Memphis, and an investigator with the Howard Hughes Medical Institute.

This malfunctioning prompts the interior of the cell to become too viscous, Taylor says. “It’s as if you took a jar of honey [and] left it in the refrigerator overnight.”

This change makes the environment inside of neurons “sticky” and less adaptable. This means some functions get “stuck” on and unable to change as in normal neurons. In laboratory settings, scientists have been able to “unstick” these neurons, and restore some cellular flexibility. Treatments based on this research are still years away, but it is a very promising study.

An elderly relative wandering off never to be seen again is the single greatest fear of most caregivers. Simply put, there is no way to completely safeguard against it, but there are some steps which can be taken to help prevent a wandering incident.

Identity jewelry or cards. The old standby of a piece of jewelry – be it a bracelet, pendant or other – with their name and contact info for a caregiver is still one of the best safeguards. It won’t prevent a wandering incident, but it will help get them home after one. If they won’t wear jewelry, make sure they have cards with your cell phone number printed on them in their wallet, purse or coat.

Door alarms. Another simple but very effective tool. An alarm which goes off whenever the door it is mounted on is opened. Our own SMPL Entry Alert is one such device. The wireless alarm receiver can be carried around the home, so you will always know when your door is opened.

Experts recommend pairing the alarm with a basic chain or slide lock from the hardware store, which will delay their exit without locking them in. That little bit of time needed to open the lock can give you the chance to intercept them. 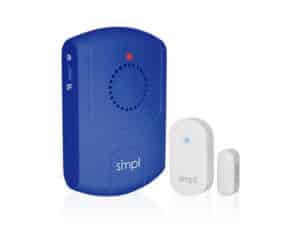 GPS Trackers. This is a more extreme measure, but it may be an option for many. Most personal GPS trackers take the form of a watch. At any time a caregiver can access an app or web portal to quickly locate the wearer on a map. Most of these devices also allow for 2 way voice communication in the event of an emergency.

“Have You Seen Me” Cards. Another analog tool which won’t stop a wandering event, but may help get them home safely & quickly. These are simply cards you have printed up – maybe the size of a postcard – with your loved one’s picture & name, with your contact info on it. You distribute these to places within walking distance where your loved one may go to: stores, restaurants, businesses, libraries, houses of worship. If they are seen by workers in those places, they can call you or EMS to help bring them home safely.

At the end of the day, the most

A little technology may make a huge difference for seniors going forward. From KEPR-TV, a report on the way the Visiting Angels technology assistance group is empowering seniors in this time of isolation.

“The tablets allow them to have virtual visits with doctors. The doctors can send prescriptions to the pharmacy and the Visiting Nurse can pick them up, so the client doesn’t need to leave their home. This service eliminates the need for at-risk clients to leave the house during the pandemic. If the client has WiFi, the tablet can be set up to make video calls to pre-programmed contacts. If the client does not have WiFi, Visiting Angels can install a hotspot.”

The technology not only allows patients to have telemedicine visits with doctors and other healthcare providers, it can also allow them to video chat with family and distant friends. Currently the program is in a trial, but there are plans to expand soon.